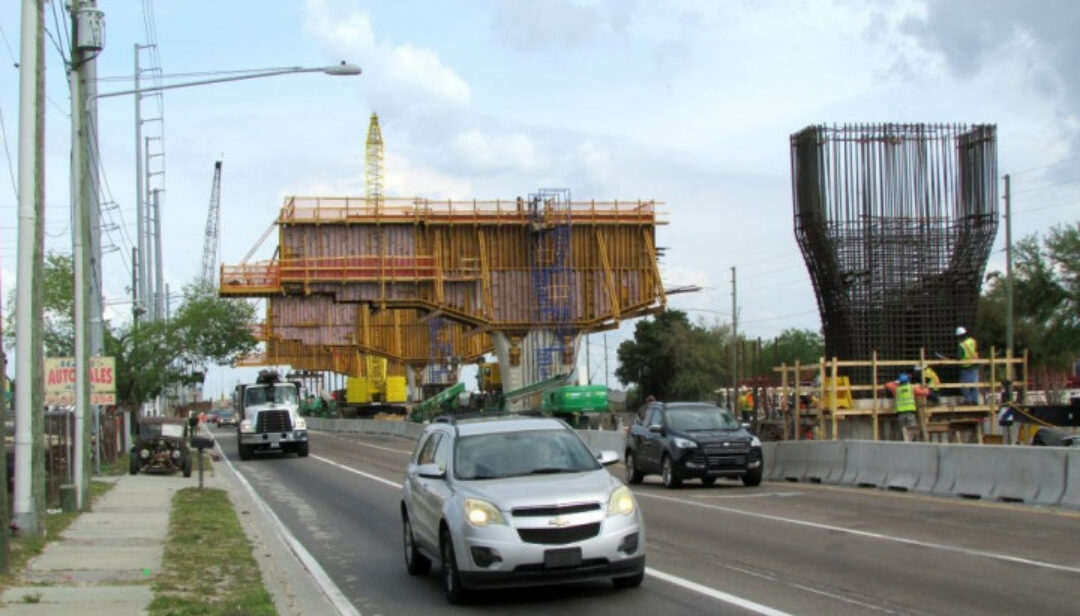 The owner’s project, FDOT, encourages the use of Portland Limestone Cement (PLC) Type IL in all their projects, knowing that the cement has to undergo rigorous testing and must be approved prior to use. Ready Mix Concrete Supplier, Argos, provided mix submittals to contractor Archer Western – de Moya and convinced them to use PLC Type IL for the sustainable and performance aspects of the material.

The Gateway Expressway project consist in constructing two new 2-lane elevated tolled roadways that will provide direct connections between US 19 and I-275, and the Bayside Bridge (north of 49th Street N) and I-275.

SR 686A, a new 4-lane elevated tolled expressway from the Bayside Bridge to just west of I-275. It will be primarily built in the median of Roosevelt Boulevard between the Bayside Bridge and Ulmerton Road. An interchange at Ulmerton Road will be built as part of this project. The new roadway will continue south through the old Sunshine Speedway property until it merges with SR 690.

Additionally, I-275 will be widened to add a toll lane in each direction along the median next to the existing lanes from south of Gandy Boulevard to 4th Street North.

Enter Address or Zip code
We use cookies on our website to give you the most relevant experience by remembering your preferences and repeat visits. By clicking “Accept”, you consent to the use of ALL the cookies.
Cookie settingsACCEPT
Manage consent

This website uses cookies to improve your experience while you navigate through the website. Out of these, the cookies that are categorized as necessary are stored on your browser as they are essential for the working of basic functionalities of the website. We also use third-party cookies that help us analyze and understand how you use this website. These cookies will be stored in your browser only with your consent. You also have the option to opt-out of these cookies. But opting out of some of these cookies may affect your browsing experience.
Necessary Always Enabled
Necessary cookies are absolutely essential for the website to function properly. These cookies ensure basic functionalities and security features of the website, anonymously.
Functional
Functional cookies help to perform certain functionalities like sharing the content of the website on social media platforms, collect feedbacks, and other third-party features.
Performance
Performance cookies are used to understand and analyze the key performance indexes of the website which helps in delivering a better user experience for the visitors.
Analytics
Analytical cookies are used to understand how visitors interact with the website. These cookies help provide information on metrics the number of visitors, bounce rate, traffic source, etc.
Advertisement
Advertisement cookies are used to provide visitors with relevant ads and marketing campaigns. These cookies track visitors across websites and collect information to provide customized ads.
Others
Other uncategorized cookies are those that are being analyzed and have not been classified into a category as yet.
SAVE & ACCEPT
Back to top